The surprising link between periodontal disease and heart health: What dental professionals need to know

Researchers have found that people with periodontal disease are almost twice as likely to have heart disease, and that risk may be even greater than for those with high cholesterol. Find out from Dr. Robert H. Gregg II what you can do in your practice to help educate patients about the oral-systemic connection between periodontal disease and cardiovascular disease, and ultimately help save lives.

Given the link between these two systemic diseases, the dental profession can be considered a key assessor of not just oral health, but also heart health. Can we help save the 800,000 Americans who die from CVD annually? (1) Or can we help the 795,000 people who have a stroke in the United States annually? (5) The first step is helping the general population understand how these chronic diseases may be related.

READ MORE |Periodontitis and its association with type 2 diabetes

Understanding the link between periodontal disease and heart disease: The suspected role of bacteria and inflammation

Scientists suspect the link between the two diseases is due to the same bacteria. In this scenario, bacteria found in infected gum tissue around teeth break down the barrier between the gums and the underlying connective tissue, causing inflammation. During normal chewing or brushing, bacteria can enter the bloodstream and move to other parts of the circulatory system, contributing to the formation of cardiovascular disease.

Inflammation, or swelling, is the body’s natural response to infection. It is possible that as oral bacteria travel through the body it triggers a similar response, which then leads to the formation of arterial plaque. (6) Oral bacteria have been found in the fatty deposits of people with atherosclerosis. (7) These deposits can narrow arteries or break loose and clog them entirely, leading to heart attack or stroke.

While scientists are still researching whether inflammation is at the root of the problem, one thing is for sure: It is firmly established that a link exists between periodontal disease and heart disease. 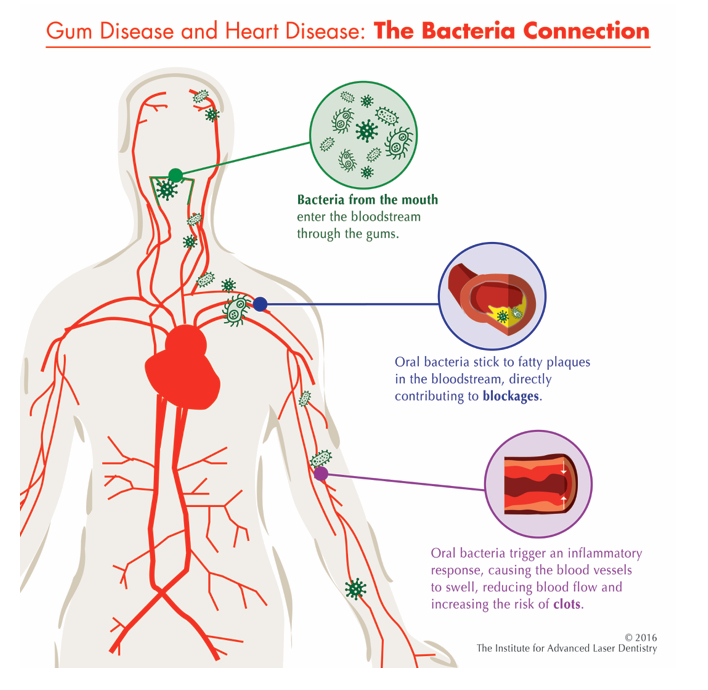 Given the link between periodontal disease and heart health—not to mention tooth loss and the multitude of other systemic diseases linked to periodontitis—it is important for patients to accept effective treatment. Treatment itself is not enough; treatment must be successful to have an impact. (8)

The first step in effective treatment is diagnosis. Is your hygiene team actively looking for the disease? Do you have a proper probing protocol in place? Patients often don’t understand, or simply ignore, the warning markers of periodontal disease, so it is imperative that your office has the tools in place to inform patients. Initial symptoms of periodontal disease are often silent—i.e., symptoms do not actually appear until later stages.

The American Academy of Periodontology lists the signs of periodontal disease as the following: (9)

Even with a prompt diagnosis, patients often refuse surgical treatment—including flap surgery, soft-tissue grafts, bone grafting, guided tissue regeneration, and the application of enamel matrix derivative—out of fear or misunderstanding. (10) The way to repair damage caused by periodontal disease is to get rid of the infection and close up the pockets. Until recently that meant painful scraping and scalpel-and-suture surgery. How can we reach past inherent fear and help patients understand the importance of treatment that is imperative to total health? Today, many general dentists and periodontists offer a patient-friendly, less-invasive laser procedure—the LANAP protocol—as another option for effective treatment that helps alleviate patient fear.

As a profession, we can help educate patients about the oral-systemic connection by looking for early symptoms of periodontal disease and offering minimally invasive treatment options that patients will accept. Every 40 seconds an American adult has a stroke. (11) Could you help save a life today?

Click here to learn about our safety protocols for all patients